Meet Somya Sahu, A Successful Athlete Who Ran Her Way Through Obstacles

“I find success in even the smallest of life’s struggles,” says Somya Sahu. Her story is one of the most interesting that you’ll ever hear.

When I was trying to set up an interview with Somya, I kept calling her Ms. Somya. She suddenly told me to call her just Somya – that’s the kind of person she is – extremely down-to-earth and friendly. One would not know that she has achieved so much and struggled a lot unless they sat down and listened to her story.

“My story – from not being able to run even 50 meters in June 2015, weighing 90 kgs, to running my first half marathon this 11 March 2018, after losing 35 kgs and recovering with a tailbone injury which I suffered as result of duathlon practice in June 2017. That too when I had undergone a knee surgery in March 2012. During this, I also recovered from severe PCOS for which I had been on strong medication from 2003 to 2015. Completely recovering from PCOS is very rare. (may be less than 5% women completely recover)”.

That is Somya’s story in her own words. But there is much more to it than just that.

Currently, Somya Sahu is very fit, very busy, and very enthusiastic! She is employed with a market research company and will soon be joining a consulting firm. She is also preparing for a certification in project management. Her hobbies include running, cycling, weight training, traveling and reading. As if that wasn’t enough, she recently started with public speaking, and watching movies, TV series, and theatre. She is already planning her next run and is excited about her new job for which she has to move to a new place! And next on her to-do list are going on a solo trip, spending some time with her family, completing her long pending book, and completing her certification. Phew! I almost got tired just listening to that. Yet, Somya is filled with so much passion for everything she does. But how did she get there from the person she was in the past? 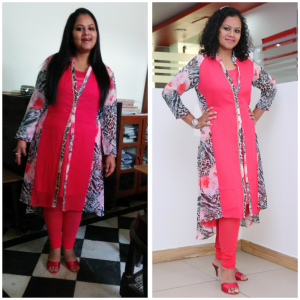 Well it was not easy. She had always been on the heavier side. However, Somya’s ordeal started only after she had completed her MBA – she had a knee surgery and was asked to take bed rest for six months. She had always had PCOS but it had become much worse at that point. She felt lethargic, directionless, and passionless which led to her being restless and unsatisfied. She also caught many lifestyle diseases.

It was then that her mother forced her to join a gym in spite of her not being into athletics. After she lost the first kg though, there was no looking back. She felt amazing and wanted to be fit. She ignored all the demotivating people and concentrated on working out and recharging. In hindsight, she is really glad that she did what she did, celebrating even the small successes, enjoying the journey and not focussing only on the end goal.

This is still who she is – “I find success in even the smallest of life’s struggles”, she says. These include succeeding at her first job at JP Morgan, recovering from a knee surgery at 25, losing 35 kg (these two were like a rebirth for her), running her first 10k, then 21k, conquering Chandrashila, becoming a motivational speaker, overcoming her depression, traveling solo to an international destination, when someone tells her that she motivated them to do something good – maybe get into their dream college or get in shape – when someone tells her that she is the reason behind their success, and when people take tips from her and reach out to her for help. 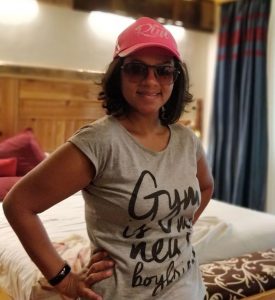 Compared to the number of successes, Somya has very few frustrations now – mostly things like something not working out at her job or a travel plan gone wrong. She channelizes both her positive and negative energies into something productive. She mostly does it by running. At other times, she just keeps herself so busy that she does not get time to think about anything.

Originally from Moradabad, Somya has been a nomad all her life – born in Moradabad, she went to school in Dehradun for two years. And then, she went to university in Delhi. Other places she’s lived in are Gurgaon, Mumbai, Noida, Mumbai. Despite all of this moving from place to place, she’s always thought of Moradabad as home. This was where her parents lived – the people who helped her when she was going through a difficult stage in her life.

This is perhaps why she thinks of her mother as her role model though she did mention that different people inspired her at different times in her life.

The major influences in her life apart from her parents were her siblings, her extended family, her network, her trainers, and her books – they taught her to always keep aiming higher and never give up. I asked which books she was especially influenced by, and she said that she read many mythology books as she was trying to connect them with today’s world. She identified as agnostic and was trying to find God.

Another thing that influenced her was a television show called I Didn’t Do It. It involved funny “what just happened” scenarios. Various success stories about becoming fit and sports movies (and the offscreen preparation by actors) influenced her too. The movies about Mary Kom and Milkha Singh impacted her so much so that she kept training despite people calling her fat. She even ran barefoot. 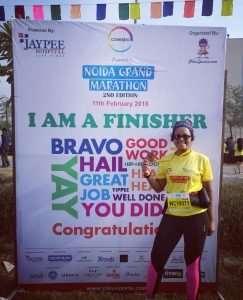 When I heard about her story, I had one very important (according to me) question that always comes to my mind when I hear about people achieving great things despite the odds being against them – “If you were writing the story of your life, how would you divide it into chapters? “. And here is her answer:

The unfit me who couldn’t climb up a flight of stairs
The me becoming fit, fighting all odds
The healthy me who ran a half marathon
The me planning for her next run

As I said before, Somya is a very humble person and she is also extremely kind. The ordeal she went through is what helped her become the sort of person she is today – mature and balanced. She realizes that no one is liable to be sweet or just to us and that everyone is struggling in their own life. She has reduced her expectations from others and tries to pass on the kindness that she receives from others. She says that she is yet to discover her purpose in life but right now, she just tries to help if she can.

Since she has such a good outlook on life, I was curious to know what her advice for young people would be. Her answer is, “Live and let live.” She advises young people to live and do more than just exist. She wants them to utilize their time and life and do their bit. Somya loves to help people in any way she can. She believes that is why she gets help from unexpected people when she needs it the most. But at the same time, she asks youngsters to be wary of the people who they are helping since these days a lot of people are not genuine while asking for help and see it as a shortcut.

Last but not least, I wanted to know what Somya wants for the world. She wishes that everyone would treat other people as humans and celebrate each of their differences – whether about their genders or about their religions or about sexuality or economic status. This is definitely a wish that we should strive to grant her.

It was great talking to Somya Sahu, she is truly an inspiration to all of us, be it her strength or her fighting spirit or her kindness. We should all take a leaf out of her book.

These Stories Are About Women’s Struggles With PCOS, But Of Our Strength Too