The first winner of our March 2018 Muse of the Month contest is Soumya Bharathi.

Aparna looked at serpentine line of cars ahead of hers and sighed. Today the evening traffic was heavier than usual. At this rate it would take her approximately 40 min to reach home, she calculated. Just as she stopped at a heavily congested traffic signal yet again, her phone rang loudly… A call at this time was quite unusual as she had strictly instructed her kids not to call her when she was driving. She picked up the call. Mansi was panting on the other side.

“What happened Mansi?” she asked worried.

“Ma, ajji is not getting up…” Mansi was on the verge of sobbing.

“Where is Sheela Aunty? And Mansi my dear can you call Prerana di?” Aparna tried hard to suppress the anxiety in her voice and calm down her little girl on the other side of the phone, even as her hands trembled on the steering wheel.

“Ma, Sheela aunty called to say she was sick and taking a day off an hour back…” Mansi was still panting as Aparna cursed her cook under her breath.

“Ma, Ajji was cutting vegetables and all of sudden she fainted on the floor. Now she is not getting up… Prerna di ran out to call Ramu kaka for help, meanwhile she asked me to inform you.. when are you coming Ma?”

Aparna went weak in her knees. The thought of her daughters all alone in the house in this situation, and her mother in dire need of medical attention was enough to send a shiver down her spine. And here she was, stuck in the middle what looked like an endless maze of vehicles. She banged her fist hard on the steering wheel but regained her composure instantly as she realized her daughter was still on the other side of the phone. She had no way of reaching home on time to do anything significant so she had to find an alternative quickly. Her mind speedily considered every available option even as the driver behind her honked loudly in irritation. She changed the gears swiftly, put the phone on loudspeaker and talked in as calm a voice as possible simultaneously navigating through piled up cars and buses on the busy street.

“Mansi my dear, listen carefully. As soon as Prerana di comes, ask her to talk to me. Meanwhile can you sprinkle some water on Ajji’s face?”

“Will Ajji get up then Ma?”, it was her 5 year old being genuinely inquisitive.

Aparna didn’t know whether to laugh or cry. She sensed that the coming few hours would be a litmus test for the family. But she was not about to lose hope. Not yet.

“Mansi my darling, let’s try waking her up by putting some water, can you do it right now?”

Aparna had crossed the signal and could see the traffic clearing ahead. Even as she drove she breathed deeply and waited for her daughter’s response.

“Ma, Ajji isn’t getting up, we tried putting water” It was Prerana this time.

“I have called the ambulance, they are on their way…”

Aparna appreciated her 9yr old’s presence of mind, even as she fought back a feeling of despair that seemed to be engulfing her.

“Prerana can you feel for Ajji’s pulse?” Aparna remembered teaching Prerana to feel the pulse as a part of her biology lesson.

“Yes, Ma… I felt it. But weakly” Prerana replied after a couple of minutes. By now Aparna had crossed the busy junction and entered the suburbs.

“Is Ramu Kaka with you Prerana?”

Aparna was hoping that the old watchman could help in someway to get her mother to the hospital as soon as possible.

“Yes, he even got Pinky Aunty. The ambulance just arrived. They are trying to get Ajji into the ambulance”

Aparna felt a glimmer of hope even as she noticed that she was just a couple of kilometers away from Vikram Hospital, one of the largest hospitals in her area.

“Then get Ajji to Vikram Hospital. I will come there directly; also take care of your little sister until I come… ” she instructed her elder daughter.

The reassuring tone of Prerana’s voice coupled with her steely determination surprised Aparna as she hung up the phone. The little girl who was shyly following her everywhere was now taking charge and doing her to fulfill her responsibilities to the best of her abilities. Her heart filled with pride just for a second and then she was back to the grim reality.

The hospital was now just around the corner.

She parked and rushed inside and waited until what seemed like eternity before the siren of ambulance pierced through the air. The nurses and ward boys carried her unconscious mother on a stretcher into the emergency. Behind the stretcher walked her little girls, hand in hand; Ramu Kaka and Pinky Aunty held them both on either side. Aparna rushed towards them. She hugged her daughters tight, as Ramu Kaka and Pinky Aunty briefly described the happenings to her. She thanked them with all her heart for their timely support and then headed towards the emergency…

After various investigations and thorough examination the doctors informed Aparna that her mother had suffered a massive cardiac arrest but they had got her just in time to the hospital before things could go completely out of their hands. Though she would need an emergency surgery that was subsequently scheduled in next couple of hours after obtaining Aparna’s permission.

For the first time that day Aparna felt helpless. Arun passed away 4 years back suddenly.. she was so shaken, it took her more than a year to recover from the shock during which time her mother took charge of her children and all her responsibilities. She provided Aparna with a rock solid support system and helped her to move on in her life. The woman who was her pillar in life was now crumbling…

The surgery began and Aparna waited outside the Operation Theatre with tears in her eyes. Both her daughters hugged her, even as Prerana whispered in her ears, “Everything will be alright, Ma. Ajji will be fine…”. She then went and got a glass of water for her mother.

Aparna’s eyes rested on her elder daughter for a while even as she consoled her little sister. Her wisdom seemed to defy her age. After her husband’s death, everyday had been difficult but looking at her daughters now, her struggles seemed vindicated..

They all waited for a couple of hours before the surgery was over and the doctors informed them that they had done their best and it would be a while before they would get to know if surgery was successful..

Aparna hesitantly walked through the glass doors of recovery room. Her mother was lying amidst innumerable wires connected to her frail body at various places. Tears flowed through her eyes unhindered. She slowly sat across the bed and held her mother’s wrinkled hands. Hands that had held her from falling every single time… Prerana and Mansi held both hers arms on either side and rested their head on her lap. After a while they fell asleep. Aparna too slowly closed her eyes and offered a silent prayer. And then she rested…

The mother and the daughters lay there, cradled in the lap of hope… As dawn broke in the sky faraway.

Soumya Bharathi wins a Rs 250 Amazon voucher, as well as a chance to be picked one among the top winners at the end of 2018. Congratulations! 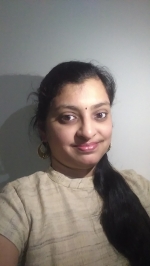 I am an ordinary Indian woman who truly believes that life is quite extraordinary! I