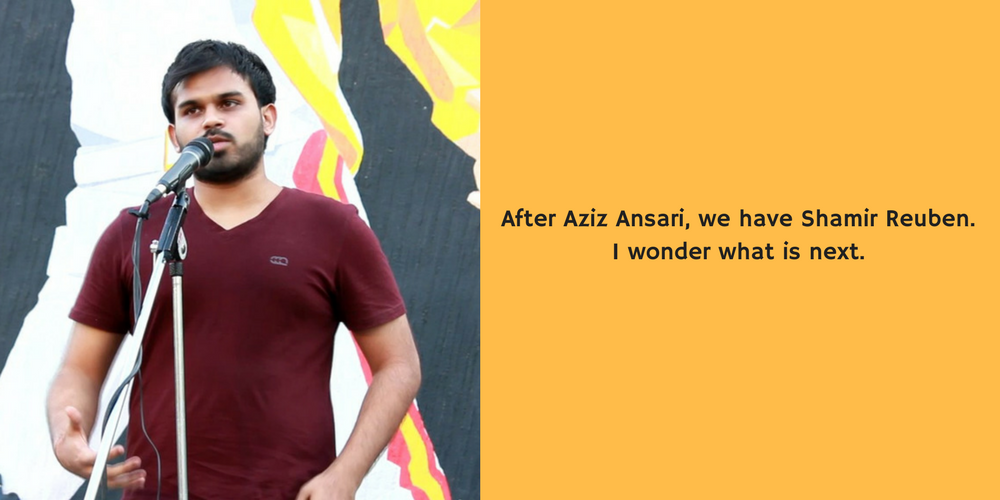 Shamir Reuben is a well known face in the Poetry scene of India and yesterday, in a post by Sakina Bootwala on Facebook he was called out for being sexually manipulative and disorderly in his conversations with girls, pressuring them to send him inappropriate pictures and texts. Bootwala posted screenshots of all the women who have claimed to have been a victim of the same act and the numbers are horrifying.

The ‘nice-guy’ is bursting at its seams and even his best friend, Harnidh Kaur, also a well known poet and published author, posted on Facebook (content has since been removed or its privacy has been changed) calling for evidence against him that could stand in court.

Apart from the horror that I feel after reading all the accounts of multiple women, and the number must be in double-digits, I feel awed at the strength of both these women, Sakina Bootwala and Harnidh Kaur in their act of standing against Reuben.

Bootwala for refusing to keep quiet and especially, Kaur because it takes a lot of strength to stand up against your dear ones to do ‘the right thing’.

I am infinitely saddened by the fact that someone who has stood for all the feminist cause and for women in general, someone who has been the voice of the ‘woke’ millennial has been exposed of being capable of such filth. The very fact makes me question that will there ever be a time that we can really trust men to be what they say they are? As feminists?

As somebody who sees women beyond just their corporeal self?

Reuben also issued a statement defending himself, but no-one is convinced by the words of the same person who was until yesterday a source of comfort to many. Maybe this is why this hits more home than anything else. After Aziz Ansari, we have Shamir Reuben. I wonder what is next.

Another aspect which is very, very essential here, that I have noted is women supporting other women in their struggles against such predators.

The issue is acutely sensitive and we need more women like Bootwala to refuse to keep quiet and we also need women like Kaur who stand up against the men around them, ‘In Solidarity’ with all the other women who have spoken out.

More power to both these women and maybe, a call to men like Shamir Reuben, to look back at their own actions and take a better step forward?

Aren’t Women Humans Too? Why Women’s Rights Need To Be Looked At As Human Rights

97 Lawyers To Allegedly Defend MJ Akbar, To What Extent Will Men In Power Go?