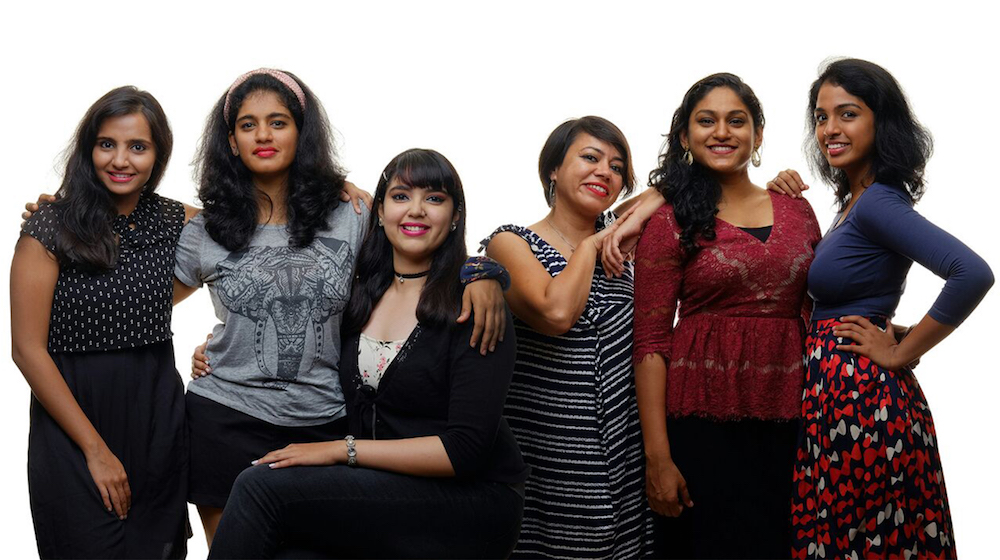 The Adamant Eves is an an all women group that performs an improvised comedy act based on cues from the audience. They have done two houseful shows in Bangalore till date.

“Check this out: The Adamant Eves are back by popular demand to regale you with their wonderful tales! This is an all-girls improv cast that will blow your mind by their spontaneous story making and tongue in cheek wit.”  Texted my friend on a Sunday morning.

“Sounds interesting. I love the name – Adamant Eves! But what does improv mean?”

“You know like improvisational theatre: Where the dialogues and story plots may be unplanned and unscripted. It is created spontaneously on stage by performers by responding to cues, prompts and themes given by the audience.”

That was enough to trigger my curiosity. I booked my tickets.

When I reached the venue, I was surprised to find a packed house. The organizer told me this would be their second show in Bengaluru, the first one also being a sold-out event. I also came to know that about thirty percent of the audience for the second show had seen their first show and decided to come back! He added that for an improvised troupe, winning a repeat audience is a huge deal!

What was the show all about?

I had never seen a show like this before. For me, public speaking continues to my worst fear. The thought of being stage on gives me shivers. I have participated in plays, elocution, and debates. The only consolation has been the fact that I can prepare, rehearse, memorize my speech and practice to perfection.

I was amazed by my their spontaneity. There were six performers – Madhu Shukla: Theatre and storytelling practitioner, Aarti Shastry: Marketing manager for a travel startup, Lavanya Krishna: College student, Vaishanivi Ab a College student, Balasree Viswanathan – a Content writer and engineer, Sneha Suhas – a standup comedian and RJ. They conducted different rounds where they performed acts based on interactions with the audience. One round even involved an impromtu song created on a volunteer from the audience!

I got the opportunity to connect with Madhu Shukla for a candid chat. I asked her how she came up with this unique concept.

The Journey of Adamant Eves

“Adamant Eves is a sub-set of Improv Comedy Bangalore. We were curious to see what kind of scenes and stories we could create with this dynamic and how audiences would react to six women improvisers.” she said with enthusiasm.

I was wondering how they manage to create a show without a script that is performed on the spot. Madhu clarified that although the show is improvised, they do rehearse and train for it like one would for any sport. The required skill-set includes listening, responding, and story-making which are built upon and sharpened by the performers.

Can women be funny?

Humour is not associated with women. The late Christopher Hitchens, celebrated, respected essayist and social commentator, wrote a piece for Vanity Fair in 2007 pondering this big question ‘Why aren’t women funny’ He argued that women are incapable of being funny because of their physiology.

“For most men, if they can’t make women laugh they are out of the evolutionary contest,” says Hitchens. “They are never going to get laid. Women aren’t funny because, well, they don’t have to be funny.”

“Men are willing to take more risks [in humor], and they also fail more miserably,” says Gil Greengross, an evolutionary psychologist with Aberystwyth University in Wales who is also the author of the 2011 Intelligence study. “But for the man, it’s worth it. If you fail and you’re not funny, you lost maybe a few minutes. But if the person laughs, the benefit can be huge.”

Liana Hone, a psychology postdoc at the University of Missouri, concluded in another study that “Men prefer women who are receptive to their humor, whereas women prefer men who produce humor.”

I also feel that women are much more conscious about their humour whereas men may take more chances. I have noticed that when men crack jokes at someone’s expense, they may be considered witty. But in the same situation, women are expected to be more nurturing and understanding.

In India, one of the most successful comedians of our times is Bharti Singh. Today, she may be known for her versatility. But unfortunately, when she started her career, the only jokes that people could come up with her was on her weight. I have never understood why Bollywood loves making fun of fat people. I fail to see the humour.

In my opinion, Adamant Eves strives to break the stereotype. Madhu clarifies that was never the intent. “We are serious improvisers who happen to be women. we are not out to shatter stereotypes. We are women interested in exploring what kind of stories lie within us that come together when we work together. It was more out of curiosity – how would the audience react to a bunch of women on stage talking.”

The last segment – my favourite

I thoroughly enjoyed the last section of the show  in which the performers completed the sentence, ‘I like my men like ….’ by using cues provided by the audience. For example, they asked the audience to name an electronic device that women use for their hair. When one of the audience members suggested, “blow drier”, one of the performers improvised, “I like my men like my blowdrier – easy to turn on!” Some cues turned even more suggestive and with double entendre!  In a country that thrives on objectification of women, and sexual innuendos directed at women, I felt this was refreshing.

I asked Madhu if she feels that Indian society is ready for such witty one liners from women. “Well, ready or not, we’re here and ready to rumble,” she replied.

Madhu concluded with this inspiring message for other women performers:

“Just do it. Look for avenues and opportunities to jam and perform. You will find more support and venues than you think.”

A Son Dispels The Stereotype Of Beauty. Winning Entry By Khyati Bheda Savla For The KAARYAH Writing Contest