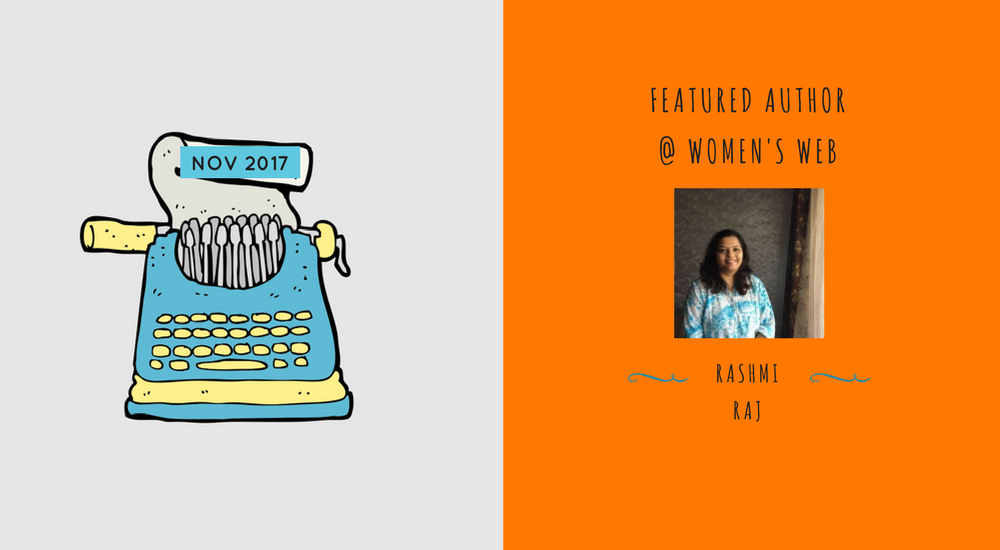 “Men And Women Are Equal Parts Of A Whole”: Rashmi Raj, Author Of The Month, November 2017

From studying law and enjoying the ‘stories’ behind the cases, Rashmi Raj now writes her own stories as a mother and as a feminist.

Every month, we celebrate 3 of our many wonderful contributors, who share their ideas, experiences and dreams with thousands of readers. This month, Rashmi Raj is one of our 3 featured authors of the month.

Besides ruminations on contemporary issues, Rashmi writes beautiful short stories that are loved by readers. Her stories deal with the ups and downs of ordinary life, with the hidden pain behind the daily routine…perhaps that is what makes them so relatable to ‘everywoman’. You can find Rashmi’s writing on Women’s Web here, and also on her own blog.

I write because I love to read…

I write to express what deeply affects me and I write to say what needs to be said.

I have always been writing since I was young. I still have my diary from that time. It is not a diary in the usual sense and I don’t write much factual stuff. I have always been a fiction fan, as far as I can remember. And all that I felt deeply about, all that left an impression on me, I always recorded it in my diary – not in a ‘journal’ format, but in the form of a story. It was like a secret between me and my diary. Every story of mine, came from an experience and when I read it, I was the only one who knew what was behind it.

Of course, growing up in a middle-class family in Mumbai, I was advised to take up Commerce (and not Literature) as that would make me more employable. But then I went ahead and rebelled and studied Law. Now, Law seems as far away from Literature as Commerce; but I really enjoyed the stories that came in the form of case studies and precedents. So there, I like to think that I got the last laugh.

When I got married (quite young by today’s standards, but on my own terms) I just got used to the routine of job-home-weekend grocery shopping – the works! My love for literature then was only limited to the books I made time to read. And I would’ve continued that way, but then I became a mother. And then failed to become one, twice after that. And while motherhood and the myriad emotions and the extreme humility that comes with it is the inspiration for almost everything I write, it was what I lost, that made me go back to my diary – creating new stories out of something that so deeply affected me.

That was the beginning of my blog. And six years later, here I am.

What do you enjoy reading? Does any of it help your writing?

I enjoy reading stories! They are my first and special love. And I have been fortunate enough to have parents who enjoyed reading and ingrained in me, the love for good literature. I am also someone who enjoys the beauty of languages; and coming from a wonderfully mixed-breed (linguistically) family, I was blessed enough to be exposed to great books in several languages as a child – English, Marathi, Kannada, Hindi.

Some of my all-time favourites have been P.L. Deshpande, V.P. Kale and Shivaji Sawant in Marathi; Premchand and Harivanshrai Bachchan in Hindi; and Beechi, S.L. Bhyrappa in Kannada (which were discussed with my father, as I cannot read Kannada). When it comes to English fiction though, everything from P.G. Wodehouse, and R.K. Narayan to Agatha Christie and Jeffrey Archer was fair game.

And yes, what I read, definitely helps in my writing. In fact, I would say I am able to write, only because I read. Reading builds in you the ability to imagine. It broadens your horizons. It makes you more perceptive, more empathetic. It helps you develop a sense of humour. And these are really important qualities to lead a happy life. And of course, extremely important qualities necessary for a writer. When I read, I like some things, I feel some things should be done differently. And that reflects when I write. Reading helps, immensely.

When it comes to writing on/for/about women, what questions and issues drive you the most?

Oh, there are several!

The most blatant ones being gender inequality. Girl = housework, Boy = outside responsibilities; or Woman =home and babies, Man = well, breadwinning (if that’s not too much trouble) and generally hanging around the house ordering the woman. [Although, times are changing now and there is much awareness and positivity about this, at least in the educated, urban households.]

Then there are stereotypes and expectations from women – girls should be able to run the house, manage the cooking and the kitchen, lay the table, arrange the flowers, uphold traditions and so on… while nothing like this is expected of the boys.

And then there are the in-laws, who expect their daughter-in-law to be a made-to-order perfect fit for their family; who is not supposed to have any aspirations of her own, and definitely no dreams; and absolutely no fresh ideas, especially of change in the way things have always been!

About issues of women safety, of the objectification of women – let’s not even get there. Enough has been said and is being said already. Suffice it to say, that if I have a choice between driving down somewhere and using a public transport, I would rather drive down, locked safely in my car than think about the possibilities of a drunk cab-driver or a misbehaving co-passenger on a public transport.

But all said and done, I am someone who lives more in the head. And so while a lot of issues do plague women, the one that I feel really sad and feel deeply about, is where a woman refuses to understand another woman. Where a woman judges another woman. Be it a mother and daughter, or a mother in law and a daughter in law or two sisters or even two friends. I have seen (and experienced) countless instances where it is one woman, who is actually the enemy of another (advertently or inadvertently). That, I think is the worst fate for any woman to suffer. Men and women are chalk and cheese, there is no point hoping a man would understand what you mean and feel exactly, but a woman? Isn’t she supposed to be more sympathetic to your cause because you are a woman too? And when women let women down, that hurts. A lot.

Do you consider yourself a feminist? Why/Why not?

For me, feminism is all about fighting for gender equality and against gender bias. I believe women have as much right to dream, to expect and to be independent – financially, emotionally – as much as men.

But I also feel feminism is sometimes misunderstood. I see a lot of hate being directed towards men in general; and I feel, that is just not fair. I mean, hating men and putting them down so that women can stand up taller, is not what feminism should be all about.

Thing is, I believe men and women are equal parts of a whole. And they are both good (and bad) at certain things. Irrespective of their gender. And if that balance is once understood, then I think life can become easy.

For example, a man may be really good with children, while a woman may be short-tempered, in which case, maybe one could look at role reversal when raising children? Or a man may enjoy cooking/cleaning while the woman loves to work in an office, has aspirations for a career, again, how about not sticking to the conventional roles in such cases?

I think what matters is both men and women to feel respected in a society, in a relationship, in a home. The need is to understand that men and women are meant to do different things, differently, and the one who is better at doing something, should do it. Basic respect, trust, mutual appreciation, these are the need of the hour.

Once that happens, there won’t be any fight necessary. A homemaker, would then be as much independent as a woman who works; because she will be happy, she will have autonomy of decision, and will be respected in the house equally as the man.

Name 3 other writers on Women’s Web whose writing you enjoy reading.

I enjoy reading several writers on Women’s Web. Each one has a unique voice and a wonderful perspective.

One of my favourites, and a lot of times my inspiration even, is Dr. Tanu Shree Singh. She is so honest and open in her writing! And her insight helps me a lot as a parent. Her language is simple and fluid, driving the point home with such ease that one learns so much reading her articles, and yet, doesn’t feel talked down to. Her work is amazing and continues to inspire me as a mother, as a woman and also as a writer.

Another writer I enjoy reading is Paromita Bardoloi. Okay, the foremost reason I was drawn to her writings was that she writes very positively on Shah Rukh Khan, my favourite! In fact, I recently sent one of her articles on SRK to a friend saying, I didn’t write this, but I wish I had! It was on how he taught a generation of the girls growing up in the 90’s to raise their standards when it comes to their expectation from men. So yes, that; but having read her other work too, I think she is someone who writes with a lot of positivity. And that I love. Her writing, her stories are so full of positivity, it makes you really feel good you took the time to read.

And finally, there’s Indywriter, whose write-ups I enjoy because they mostly deal with very familiar, every day things that we think about – be it about raising immunity in children or understanding how toys can help children gain insight. She writes for the mother of today, the woman of today, she writes for the thinking woman.

And let me also mention, I have quite a few friends here including Anupama Dalmia, Akshata Ram, Meha Sharma, Prerna Wahi, Rakhi Jain, Ramya Abhinand, Tina Sequeira, and a few more – each of them a gem and each of them writing amazing stuff!

So, yeah. Thanks for choosing me as author of the month. It feels great to see the voice in my head can reach so many people thanks to a wonderful portal like Women’s Web.

“I Write To Get My Emotions Out And Keep Myself Sane”: Shruti Giri, Author Of The Month, March 2018

“I Am My Own Muse. I Inspire Myself”: Maitabi Banerjee, Author Of The Month, August 2017

“I Write To Articulate My Thoughts To Myself”: Nayantara Mallya, Author Of The Month, January 2018