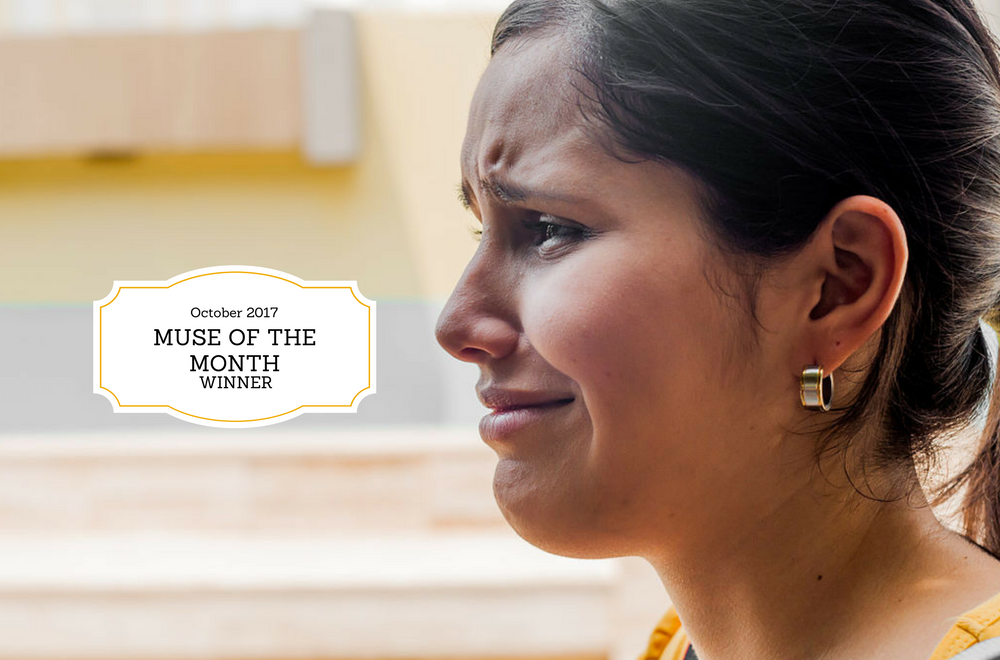 On that day, as soon as the relatives and guests dispersed and they were on their own, Mahesh forced herself on her violently. She tried to protest, but he said it was her duty now to please him physically.

Here is the fifth winner of our October 2017 Muse of the Month contest, Meha Sharma.

The Power Lies Within

Sushila locked the door of her dilapidated house in a hurry and took long strides as she was getting late for work. As she sauntered on the bumpy Mumbai roads that took her to the nearby posh locality, her hand surreptitiously reached her neck and as she touched it, she felt a surge of pain that shook her.

She could all of a sudden recapitulate the entire scene that transpired the previous night. Her husband, a watchman in a gated community, would force himself on her every night. He would never be gentle and the mark on her neck was merely one of the few manifestations of his sadistic and carnal acts.

Sushila worked as a maid at a number of houses and she would spend her days cleaning, cooking and washing utensils. She did not have kids as yet and it was only a year since she had got married.

Mahesh, her husband was not an alcoholic and he earned good enough to make ends meet and even save some for the rainy days. Sushila’s father had found no vice or ‘bad habits’ in him and so he found him to be the perfect match for his daughter.

Sushila was excited and looked forward to the day when she would be all decked up and become a bride. The day she got married was etched in her heart. On that day, as soon as the relatives and guests dispersed and they were on their own, Mahesh forced herself on her violently. She tried to protest, but he said it was her duty now to please him physically. She had not been intimate with anyone before and so she assumed this was how it was done. But, then this became an everyday practice.

She would lie writhing in pain and gradually she accepted it as her fate.

As days passed, her neighbour and friend Ratna enquired about the bruises. She unwillingly confided in her. It was Ratna who told her that lovemaking could lead to pleasure too. She was absolutely alien to this aspect of physical love or that it could be a bond between husband and wife.

She was hastily brooming the floor in flat 202 in Shakti Apartments, where she worked in a number of houses. Reema madam suddenly came out in the living room and started reading out the morning newspaper aloud and her husband listened to her with utmost attention.

“It is such a path breaking decision. What do you think Rahul?” Reema madam asked her husband Rahul sir.

“Yes, absolutely. When I think of women going through marital rape each day, I shudder. Women cannot be treated as commodities”.

Just then Reema madam’s mobile rings and the conversation comes to an end.

But, the words echoes in Sushila’s mind the whole day. She wonders, if what Mahesh does to her would also be termed as ‘rape’. She was not a ‘minor’ she thought. Such thoughts tussled within her and she tossed and turned in her wooden bed.

Mahesh came and slept next to her. She knew what was going to happen next but she still felt scared. She felt naked and she felt as if she was nothing but a piece of flesh which satiated the desires of a man.

After the act was over and done with, tears ran down her eyes, as Mahesh turned and dozed away to glory.

The next day, as she washed utensils at Reema madam’s house, she asked her hesitantly. “Madam, if a man has sex with his wife, without her consent, can the police punish him? I heard you and sir talking about it the other day”.

“Yes, absolutely. It is a crime. But, why are you asking Sushila? Is everything alright? What is this mark on your lip? The other day also I had seen a mark on your neck. But, you said it was nothing when I enquired. Tell me, maybe I can help you.”

At this, Sushila broke down. She held on to the kitchen sink and cried like a baby. The barrage of emotions which she had kept in check hitherto had been let loose.

As she narrated her plight to Reema madam, she looked at her unbelievingly. Sushila felt light headed and felt relieved by talking about it to someone.

Reema madam was very kind to her. She said one of her friends worked for an NGO and they would help her lodge a complaint and follow up.

She asked her finally, “But, Sushila, are you sure, you can take this step? You know the repercussions, right. I am with you. I will support you, but you will have to be strong enough to get justice for yourself. It can be emotionally difficult.”

Sushila looked at her with eyes that did not seem to give away any emotion whatsoever, and suddenly everything ran through her mind, how every night she felt scared, violated and went through hell.

She spoke without even thinking twice, “Yes, Reema madam, I am ready to lodge a complaint against him. I cannot lead this kind of life anymore. And I am financially independent. I am sure, whatever will follow cannot be worse than what I am already going through.”

Merely saying these words made her feel great. She felt in control of her life. She wiped her tears and looked towards the open window. The sun had risen and it shone bright.

It was a new day.

Meha Sharma wins a Rs 250 Amazon voucher, as well as a chance to be picked one among the top winners at the end of 2017. Congratulations!

Image source:By The Photographer (Own work) [CC0], via Wikimedia Commons, for representational purposes only.

When The Victim Turned Assassin In A Virus Attack