“If only you had taught Rohit to respect a woman and her decisions. I am sure your parents did not give you that liberty, but you had the privilege to right a wrong.” 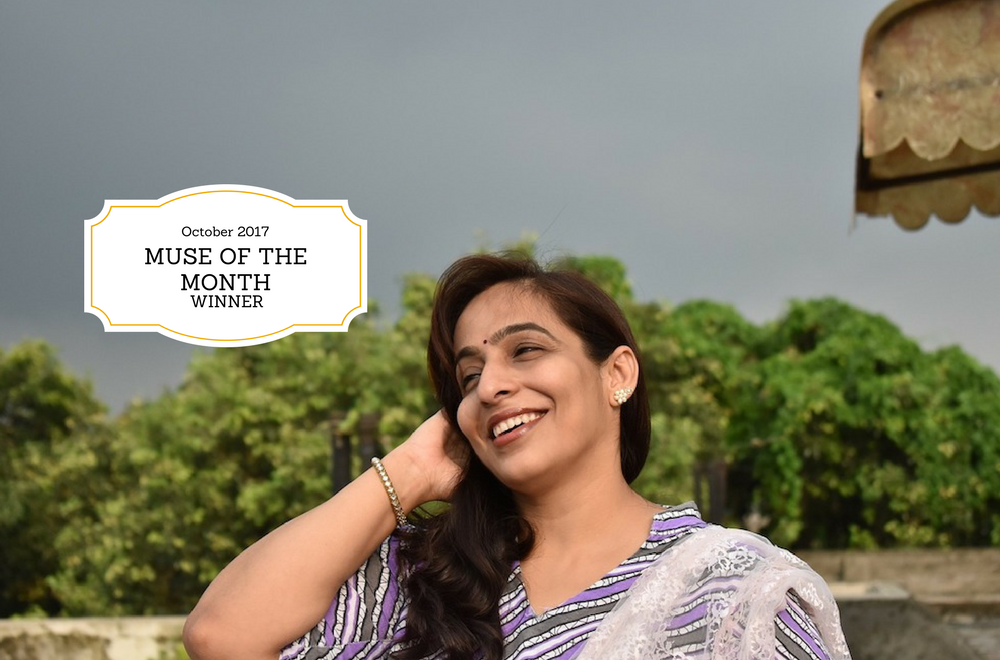 “If only you had taught Rohit to respect a woman and her decisions. I am sure your parents did not give you that liberty, but you had the privilege to right a wrong.”

Here is the first winner of our October 2017 Muse of the Month contest, Saumya Srivastava.

The Case For Justice

“They are coming in an hour. Please take care while talking to my folks.” Rohit sounded tensed.

Sanaya gave a faint smile, while fluffing the cushions.

She kept the cushion aside to have an eye contact. “I have parents too. My education did not teach me to be disrespectful, especially to elders. So relax.”

To further relax his raised eyebrows she added, “I know what you mean. I’ll take care.”

As Rohit ran to the airport to pick up his parents, Sanaya tossed the matar paneer and the smell told her it was done just right. She instructed her help to wrap the kitchen soon, and gave her home a final glance. All looked good, and she felt good. As she adjusted her wedding photo on the side table, she reminisced her last two years of marriage.

It had not been all sunny summer. There were days when artic winters hit unexpected, but then spring always made its way. Well, winters were coming. Her in-laws were coming. Sanaya and her parents-in-law had difference in opinion, approach and attitude towards life. Sanaya was the girl of the future, while her in-laws were tied to the past. The only atom that bonded them was Rohit.

“This time it will be different. I will not meddle with their affairs,” she made a promise to herself.
The honk of the car gave her the signal to place some water on the gas burner for tea. Post settling in, and exchanging the pleasantries, the normal drill began.

“So, how are things at work?” asked Rohit’s father looking at Sanaya.

“Great. I have just been promoted. It demands more much but reaps much higher.”

“I gave you that new tava for rotis na? Did you try it?” Her mother-in-law soon subdued her enthusiasm on the promotion, by prioritizing her home chores above all.

“Well, she will use it only if she gets into the kitchen.” The sly remark by her father-in-law made her repeal but she took control.

As Sanaya lifted her eyes, Rohit dug deep in the tea mug. That disconnect slayed her more than the snide remarks.

“I will just come.” Sanaya ran towards the kitchen as words fell out of her mouth. She couldn’t believe she stood the whole day cooking for all of them. Her face was shattered and so was her posture. She bent on the kitchen slab to take rest.

“Didi, sunogey toh sunaye jaogey. I don’t have a thing, yet I fight with my alcoholic husband every day. I stand for what is right. What stops you from taking a stand?” Laxmi, the help placed her hand on Sanaya’s shoulder and a connection was made instantly. Sometimes, the people from whom you expect the least give you the best advice.

The dinner was served and everyone took a seat. Laxmi kept serving them rotis, and as they were about to wrap up, Sanaya said, “Laxmi ab tum jaake khana kha lo.”

Laxmi nodded and proceeded to the kitchen.

“How much is her pay?” hushed the mother-in-law.

“Tch.Tch. I know you earn well, but you do waste money.” said the father-in-law.

“Papa, that’s the rate for a full time help. She is good at her work.” Rohit tried to explain.

“Why do you need a full time? If a woman is efficient, then she can take care of both – work and home.” His stance reeked of judgment.

After talking a hold on himself he replied, “You could have opted for a lighter work load, or no work at all. Rohit earns in great numbers. Home and kitchen is your priority. Look at him, he hardly eats.” That was his explanation for efficiency.

“Papa I think he eats just fine. He is already overweight. As for me, I don’t work for money. I work for my existence. This is who I am, and will be. I try to juggle and manage both ends. I do make a mess at times, but then I am human. I can afford a help to assist me at home, so I could put my best foot forward at work.”

Sanaya got the wind and her boat started to sail.

“Overweight? Who talks like this about her husband?” The mother-in-law was furious.

“Don’t bother Kamala. The generation today has no morals or respect for others.” The father-in-law had it all figured out.

“You know, you can crib behind the back and be a beauty, or talk in front and be a beast. I love the beast. I want to talk and I want to be heard – for once and for all.”

Rohit looked at her but this time she made the disconnect.

“Before you folks came I promised myself that I wont speak, but clearly that is not working out. If I talk, I become defiant, bigadi hui, ziddi, but I will take those labels happily. I don’t expect you guys to change your thinking pattern, as I know they are deep rooted by now. But, I also don’t expect you to change me. I have worked hard to be where I am. Till when will gender equality stay on papers?”

They all had a despicable look for Sanaya by now. The mother-in-law gave a nod of disbelief. She had prayed daily to The Almighty for a good wife for her beloved son and this is what she got in return.

“Nahi. Upbringing mein.” Sanaya voiced her opinion. “If only you had taught Rohit to respect a woman and her decisions. I am sure your parents did not give you that liberty, but you had the privilege to right a wrong.”

Rohit found an opportunity to talk, but Sanaya wanted to get it all out before she was slowed down.

“I don’t speak for myself but for all women out there. We aren’t bad daughters-in-law if we are ambitious or have a different outlook. You may call us beti, but calling someone a daughter and treating them as a daughter are very different. All I expect from you is to not shun me. I believe in myself and what ever I have attained today is because I am worth it. Always have been and always will be.”

She got up from the dining table and stacked all the used plates. While taking the plate from Rohit’s hand she mumbled, “I fight men out in the open, in my office premises every day. If only the man in my home could assist me. Fighting with him is the worst. Wake up!”

She left for the kitchen and placed the plates in the sink. Her hands felt light when the load was off, but her heart never felt more liberated before. She had done it – she had put forward her case of justice.

Sanaya placed her hand on Laxmi’s shoulder and both of them smiled. They may not win, but they did not have a thing to lose.

Saumya Srivastava wins a Rs 250 Amazon voucher, as well as a chance to be picked one among the top winners at the end of 2017. Congratulations!