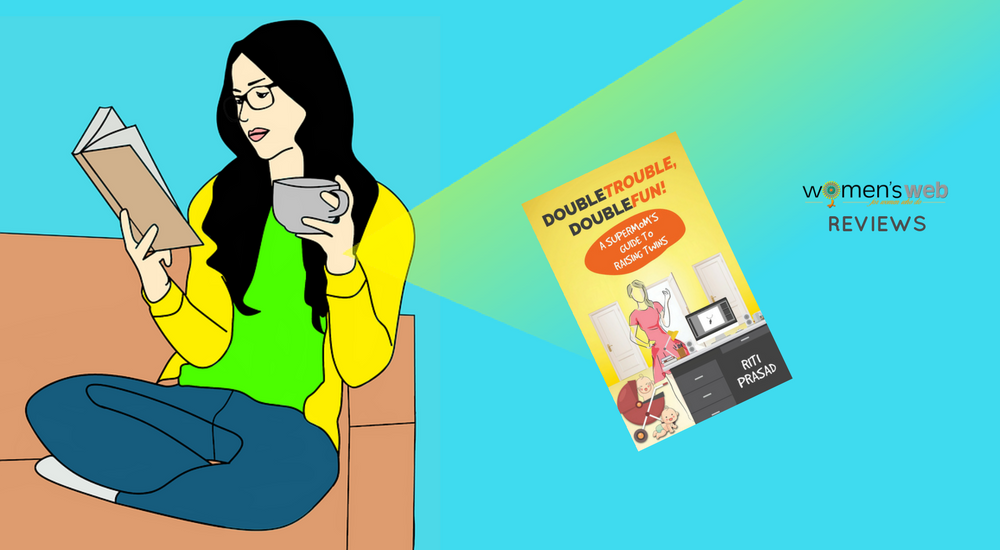 When I first looked at the book Double Trouble, Double Fun, my curiosity was piqued, as a mom of twins. You know, how one is all curious to know how the other twin moms have survived and lived to tell the tale of their twin motherhood journey?

My curiosity was what had introduced me to the blogging world as well, and so I was familiar with the author, Riti Prasad, via her blog – I have followed her through the early developmental phase of her twins as well as mine. Through the blog I was aware that she was a working mom raising twins, which was a profile very similar to mine. As I followed her I realized that she had published a couple books. This was one other reason for me to pick up the book – I was looking forward to reading the book and see if she would disclose how she was able to juggle so many balls in the air.

Being a light, informative read, the fun part of the title is apt as well, because with twins the parents get a couple of other secret, unexpected gifts. They get an instant celebrity status and they need to get their humor polished and easily accessible as parenting twins does get comical.

Sometimes it could be the kids who do funny stuff because they have a partner readily available for mischief. Like I cannot help but remember my kids dousing each other with freshly ground flour. Or both of them helping each other to climb the water closet to peek through a window to see the neighbor’s dog.

Sometimes it may be the overworked mom trying to feed the same baby twice and realizing her foolishness, when the baby vehemently refuses the offered food. Then there are the funny questions from strangers who have educated themselves about twins from our very own Bollywood – these range from does one cry when the other one falls? Do they fall sick together? Are they natural? Which one do you like more? Humor helps when from questioning they move on to comparing each other right in front of the kids themselves.

Just like her twin boys, Riti has a twin track running through the book. In one track she talks about her personal experiences about raising twins, and in the other she is giving out well researched generic advice regarding common topics that a new mom would face, especially with regards to twins. These research topics include ideas that she has either researched or has spoken to some well-informed people. There is advice from her doctor, a couple of moms who have birthed twins and then there are the grown up twins themselves. So the information is all relevant and pertinent.

The book is very well structured and starts with the conception of the twins, records her pregnancy journey and then each year of the kids life is recorded as one chapter. Considering that her twins are 11+ years old, the details that she has provided about her pregnancy and the early days with the kids are noteworthy.

The chapter on the first year struggles of managing the babies feed times, being the food generator, clean up specialist etc. reminded me of how exhausted I had felt and I was mildly surprised after realizing that I was having trouble reading about it after 10+ years of my experience. This shows the level of details and the openness with which she has documented her journey.

Moving on – the kids’ growth has been captured year by year with a chapter for each year. She has openly and honestly spoken about the struggles that she has faced because of the kids being different from her expectations, and how it has humbled her to be accepting them as they are. As we all know that life is never linear so the tiny bumps that she faced in this motherhood journey – vis a vis – the addition of a pet to a busy household, introduction to school, her personal experience with them being in the same class vs being in a different class, the inherent difference in each kid and how they thrived or were challenged in various situations that they all faced together – have all been vividly captured. Some of these concerns especially with regard to the kids’ emotional development is something which each mother (of multiples or otherwise) would ponder about, so talking about it is a plus point.

There are some ideas as well for working moms (of multiples or otherwise) by way of a case study on how they can prioritize and delegate the tasks such that the focus remains on her, the kids, the family and home. The kids’ antics, her take and interpretation on them do inject a wary humor into the book and must say that they are intelligent chaps.

There is also a section in which she has answered some of the common questions that people tend to ask out of a general curiosity regarding twins.

So in short the book serves as the grand old aunt when it comes to doling out advice for pregnant women with twins. Although I should say a word of a caution that it is by no means an exhaustive guide. Take for instance that multiple pregnancies are more often than not riddled with many complications, the ‘Neonatal Intensive Care Unit’ abbreviated to NICU is something that would-be-parents are introduced to early on during a multiples pregnancy, as the doctors want the parents to be aware of it, if and when their services are needed. If I may say so her pregnancy was comparatively normal and so she has not mentioned anything about the NICU, Apgar scores and such. So the reader should not replace this with a doctor or a nurse consultation. This she herself has clarified in the book.

Here’s wishing all the very best to Riti and her twin sons Ojas Tejas. Hope you rock the pre-teens, teens and all phases of your lives. One review comment from my daughter was she would have liked to see a picture of them somewhere in the book!

If you’d like to pick up Double Trouble, Double Fun by Riti Prasad, use our affiliate links: at Flipkart, Amazon India, and Amazon US.