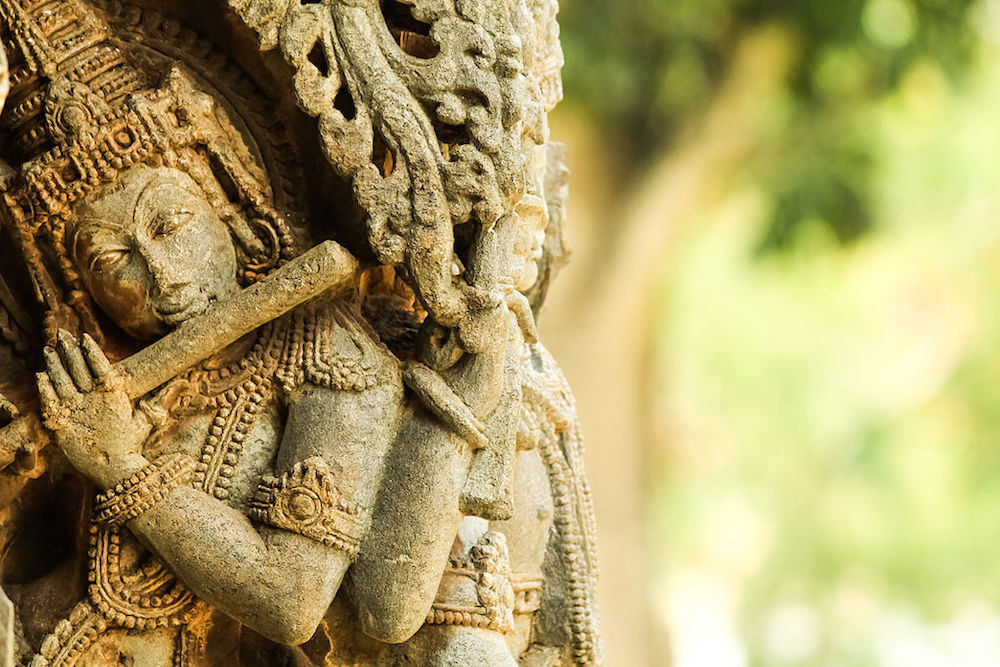 Love is what Krishna epitomises for me. I don’t know any other god who loved like him. But then, they also say when you need Krishna, you call him. He comes. He comes in many forms. Krishna comes to teach, to heal and to answer. Over the past few years, I had been questioning love a lot. Our generation is confused. We have the money. We have the power. But we don’t know what we are seeking. As I questioned love, the idol of Krishna that stands in my altar heard it, and he came.

It was a long summer Sunday. I stay with four other girls in a flat. We were all sleeping. The calling bell rang for the fifth time. I woke up grudgingly and opened the door. I was angrier as I could not see anyone. But someone touched my hips. I looked down. A woman with a bright smile looked at me. She was folding her umbrella back. I realised that the woman was a dwarf and she was pressing the calling bell with the handle of her umbrella.

I immediately apologised for the delay in opening the door. “Oh”, she said, “don’t worry. I was looking for a place to stay. Someone told me that you had space.” She was wearing a white cotton frock that had a blue ribbon to it. That was how Krishna entered my life. As a roommate, then a friend and the warrior who led so many of my inner battles to peace.

Let us call her Krishna here. She has asked me not to reveal her identity. There is something about her; the moment she entered my room, it brightened up. She was hardly three-feet tall. Almost half my size. Finally, we all got introduced to her. Her name was Krishna and she hailed from Himachal. She was 40-plus. And she was working as a calling executive in an international bank. She worked night shifts.

The first thing Krishna told us is that she is here only for two months; she is getting married after that. I have never lived with a woman this short or known one getting married. It was a new world to me.

Most of the time, Krishna would be struggling to get water from the water purifier or to use the gas stove. In our world it seemed Krishna always had her struggles. But I have never seen her being angry or being apologetic about calling us each time to get her water. Eventually we got a small table which she could use to stand upon and get things from the kitchen slab.

Every day at the dinner table the cribbing would begin. Everyone talked about how they are becoming fat. Fat is the word that ran around each day. It was Krishna who made the first rule, “Don’t curse the food. If the food curses you back it will become poison to you.” From that day at least during dinner time there was no food-hating conversation. With her presence our cribbing went low, very low.

Krishna was half my height and the oldest in our flat. But I am yet to meet another woman who had her body confidence. Her body talked of immense grace. None of the girls felt their bodies were enough. Something was always wrong.

But Krishna was okay in that small body. I never heard her utter a negative word about her body or herself. I am sure she had her battles, but the Krishna I saw was all accepting. It showed on the smile that kept playing on her lips, all the time.

There was something about Krishna; she would soften us all. Otherwise there would be things like spilt milk, empty cans or something else that would make someone angry. But everytime that happened, Krishna would smile and just talk to us. The angry outbursts lessened. We felt better around her.

She worked night shifts. 9pm to 6am. That was her shift time. I missed her when she would go to work, because during the day we stayed crazily busy.

After sometime we met her fiance. He also works in a call centre. He is 45. A little shorter than her. Every day in the evening around 6pm, he would come. He always brought her a fruit. Sometimes an apple, sometimes bananas and at other times a pear. But he brought her a fruit, which Krishna accepted as the world’s most beautiful treasure. I never saw him gifting her anything else. She was his first love. But he was Krishna’s second boyfriend, after being ditched by someone else.

Every time he came Krishna ran to see him. Her face would glow. I always had to unlatch the door because the lock was beyond her reach. And lord knows, every time they saw each other love would just blossom. The people who had boyfriends in our flat would tell you that there would be a lot of love, but fights too. This is the first time I saw two lovers accepting each other without a complaint.

We often went for a walk in our nearby park. I used to sit and read a book on a nearby bench. They sat together talking. Life felt so good. I often wondered, no matter how hard I tried to look better and be better, no one looked at me that way. But the question also remains – did I ever look at someone the way Krishna did? We criticise too much and that is why we are hurt so much. We all are just waiting for some kind of perfectness or something more that would fill us.

Each one of us took turns to take her shopping for her wedding. We shopped mostly from the kid’s section. Sometimes the girls would raise hell if any shopkeeper made a snide comment on her. Krishna smiled. We got her a dinner set as a wedding gift. For two months our days began and ended with her.

One day a car came, and it was time for her to leave. We heaped in her luggage. We hugged and stayed silent. Krishna smiled. Just before she left, another flat mate ran upstairs and came back with a pillow. Use this to sleep midway. Tears glistened down. Krishna smiled. The car left. We came back silent.

That day no one ate at home. I went to stay with a friend. Others came late. We missed Krishna.

After I returned home, I looked at her empty bed. I missed my Krishna, who finally taught me love. That love is accepting all that is. Is love that simple? But that’s how Krishna lived, without a complaint. I kept flipping my photo gallery; there were photos that showed me dancing with her, eating, shopping, making faces, but no matter what we did, there was happiness. May be that is love: to be happy with all that is. My heart was finally at peace.

It’s more than a year that Krishna left. She is a married woman now. I miss that lingering smile and her gentle footsteps. As I will go to offer my prayers to the lord today, I will pray for her for I know, she was my teacher, my Krishna who blew the conch ‘Panchjanya’, asked me to look within the turmoil of my heart and win the way Arjuna did with his ‘Gandiva’ bow. She drove the chariot as I flew my arrows. When I gave up on love, she gave the hope like the lord did to Arjuna. For Arjuna, Krishna came as a lord. For me he came in the form of a dwarf who became my pathfinder.

They Honour Me As Krishna’s Mother, But Will Anyone Weep For Yashoda’s Lament?