I Quit! What Now? Is A Funny Look At An Indian Woman Quitting Work For The ‘Wrong’ Reasons

I Quit! Now What? by Zarreen Khan is a humorous story of a woman who takes a sabbatical not for maternity, not for higher studies, but just like that. Here is an intriguing extract from the book. 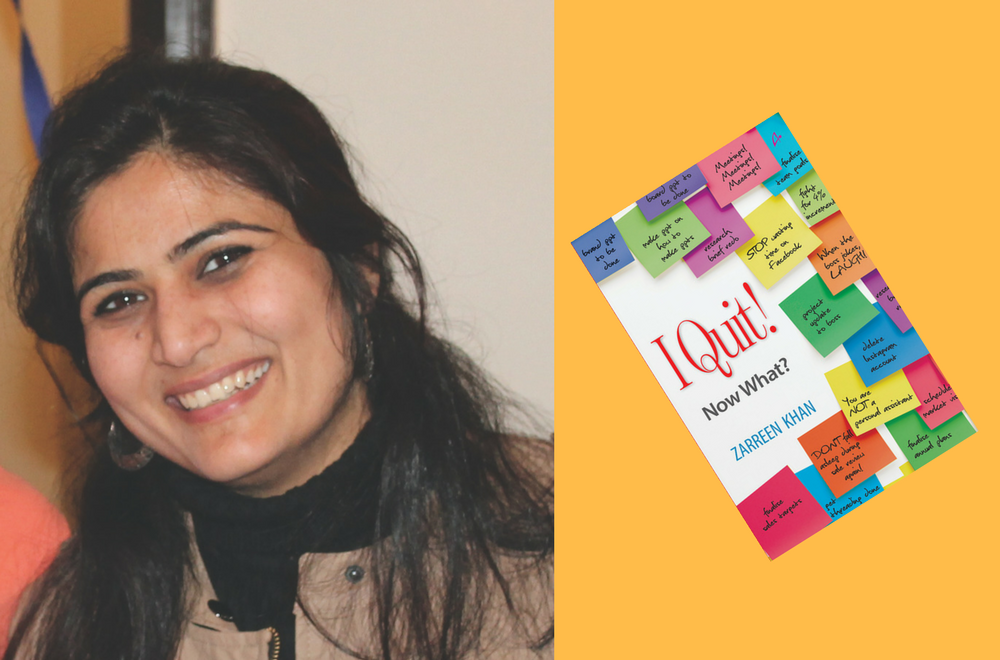 I Quit! Now What? by Zarreen Khan is a humorous story of a woman who takes a sabbatical not for maternity, not for higher studies, but just like that. Here is an intriguing extract from the book.

I sigh and start revisiting the trip in my head. It’s just a series of bridezilla episodes but I don’t want to give her the pleasure of knowing that.

‘Wonderful,’ I say faux cheerfully. ‘The weather was perfect, it was green and gorgeous, and the wedding was a lot of fun. I so wish I didn’t have to come back,’ I confess.

Nivedita nods. ‘I know the feeling. I think we all just need a break.’ She gazes at me with a twinkle in her eye.

I think she’s trying to be sarcastic about my leave just like the others. But I ignore her and go back to eating.

She clears her throat and moves in closer to me. ‘I mean, a holiday where you can just be, you know?’

I continue to slurp my noodles. There’s something about slurping noodles. Makes them more delicious, I think.

She leans in even closer. I am now irritated. You can’t slurp with someone so close to your face. She lowers her voice. ‘So I’m taking one.’

‘You’re taking one what?’

‘I’m taking a break,’ she half-whispers, her eyes scanning the room for eavesdroppers. When I see Nivedita do such things, she’s typically hoping for eavesdroppers than guarding herself against them.

I put my fork down. ‘You’re going on a holiday?’ Wow! Maybe I won’t be the most-hated person in office anymore. Maybe she’s going this week. Maybe she’s leaving tomorrow.

‘No. Well, kind of,’ she says, sitting back with a satisfied look on her face.

‘You’re not going on a holiday?’ I ask confused.

‘Oh, I am,’ she says with a grin, rubbing her belly again.

‘Like when you’ll have the baby?’ I clarify, disappointed. What a bummer. Here I was thinking the office could make her the target of their vengeance rather than me for taking time off…

‘I’m taking a year off,’ she announces.

I look at her sceptically. ‘But maternity leave is just for three months post delivery…’ Yes. I know all the types of leave the

corporate world doles out to their slaves; even those that may not apply to me anytime in the near future.

‘Yes, it is. But I spoke to Mahesh this morning and told him I wanted to take a sabbatical.’

I’m stumped. ‘A sabbatical?’ I knew I should’ve had a baby!

‘Yup.’ She looks at me smugly again.

I inhale deeply. Okay. She’s taking a full year off. Not a holiday, a real, legitimate sabbatical. Which means when she’ll come back to her job after a year, her position will be held for her. Time will hold still. And this has been granted by Taskmaster Mahesh?

‘But what will you do with a break now? Don’t you need time after the baby is born?’

She shrugs as she stuffs an apple in her mouth. ‘I’ll see about that then. But right now, I just want to be. Just take a break. You know?’

Oh boy, do I know. ‘Yeah, you’ll get real busy with the baby later anyway.’

‘Yes,’ she nods, stretching out in her chair. ‘I have another five months to go but there’s so much I want to do.’ Her eyes light up as she looks away dreamily. ‘I want to pursue my singing… I want to restart playing the sitar… And paint… And just sit in a park and look at the trees… They’re so golden at this time of the year. Life’s too short, you know. I need to do it now!’ she says.

I go into some sort of a trance.

I also just want to be. Just paint. And sing. And dance. And sit in the park… But, of course, there is no park near my house. Unless I count that shady DDA park, which, more often than not, is a lovers’ hub. But the rest of it, I want that too, I’m pretty sure.

Minus the singing maybe. I’m no good at it.

Also minus the dancing. Even Big Bum Uncle didn’t dance with me for more than five minutes at Isha’s wedding.

And painting is a clear no, no. Come to think of it, I don’t think I’ve ever painted. I only got as far as crayons…

I try to jerk myself out of my daydream. ‘Wow. So what happens to work while you’re away?’

‘I think they’ll get Johar to replace me,’ she says with a little shrug. ‘I’ll be back in a year in any case.’

She beams with satisfaction. ‘It’s perfect. Everything I’ve ever wanted to do. Now is the time.’

I nod and go back to my noodles, not knowing what to say.

‘And Mahesh has agreed?’ I still can’t believe her luck.

‘Well, that’s fantastic then!’ I smile at her as genuinely as I can without letting her see the green horns growing inside me

As she gets up and wobbles back to her seat, I push the empty plate of Maggi away.

I should have had a baby.

Excerpted with permission of Amaryllis Publishing, from I Quit! Now What? by Zarreen Khan, available in bookstores and at Amazon India and Amazon US