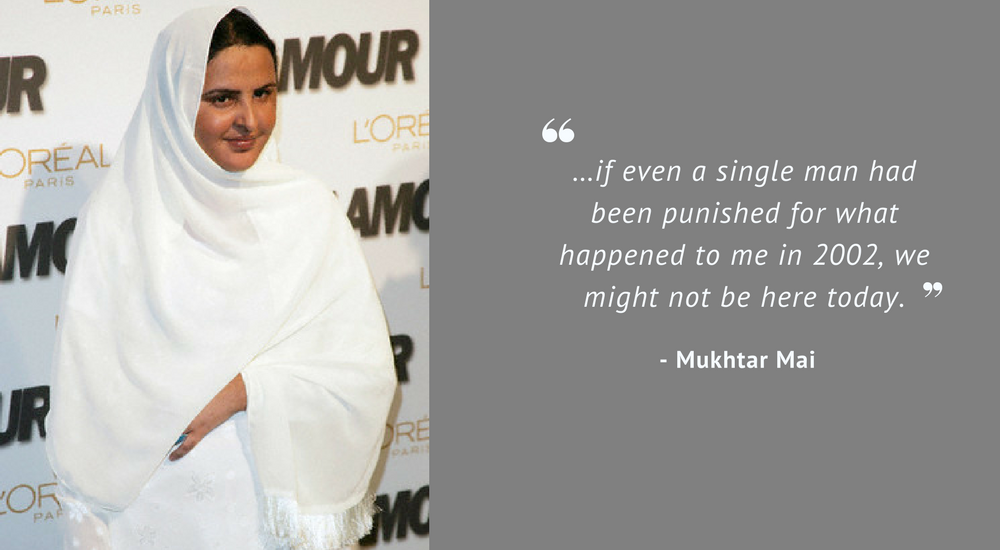 This tradition of ‘honour revenge’ is utter cruelty disguised in the garb of justice. How long will it ruin the lives of women?

“I am not surprised. It is a norm for panchaiyats and jirgas to penalize a woman for a man’s crime. They call it ‘justice.’ Men in Pakistan, guilty men, go unpunished. Women, innocent women, get punished.” – Mukhtar Mai writes for Geo Tv.

In certain areas of Pakistan, Jirgas or tribal councils practice the concept of ‘honour revenge’, as Wikipedia puts it. That is, when a man is accused of rape, his sister or any other woman in the family is allowed to be raped by the family of the victim. This absolutely awful practice has ruined the lives of many women and apparently, the official authorities refuse to take any solid action.

Mukhtar Mai, a Pakistani woman and activist for women’s rights, was gang-raped in 2002 on a similar basis. Her brother was accused of having an affair with a woman of another, more influential clan and hence, she was in turn raped by the men of that clan. What astounds me is the fact that, when does this objectification of women as a token of honour stop? Is it not high time, already? This incident was in 2002.

An article in Geo Tv by Mukhtar Mai (linked to above), reports on another case from a few days ago where a council ordered the revenge-rape of two teenage girls due to this utterly sick mentality. Mukhtar Mai writes, heartbreakingly about how this could have been stopped had proper action been taken all those years ago when she refused to keep quiet and not commit suicide as per the ‘custom’. Mukhtar Mai herself, in spite of getting international attention, did not get justice from the judiciary of Pakistan.

Both these incidents, are one of the million other reasons as to why we need feminism, women’s rights and empowerment. This is why it is not ‘okay’ to stay in one’s bubble of privilege and chant about ‘feminazis’ and tell them to shut up. The only thing that needs to shut up, down, left and right is the bullshit going on under the veil of patriarchal ‘traditions and customs’.

And if you don’t see the extreme problem in this way of life, then I suggest you get your eyes checked.

An Eye For An Eye, A Tooth For A Tooth, And Rape For A Rape!