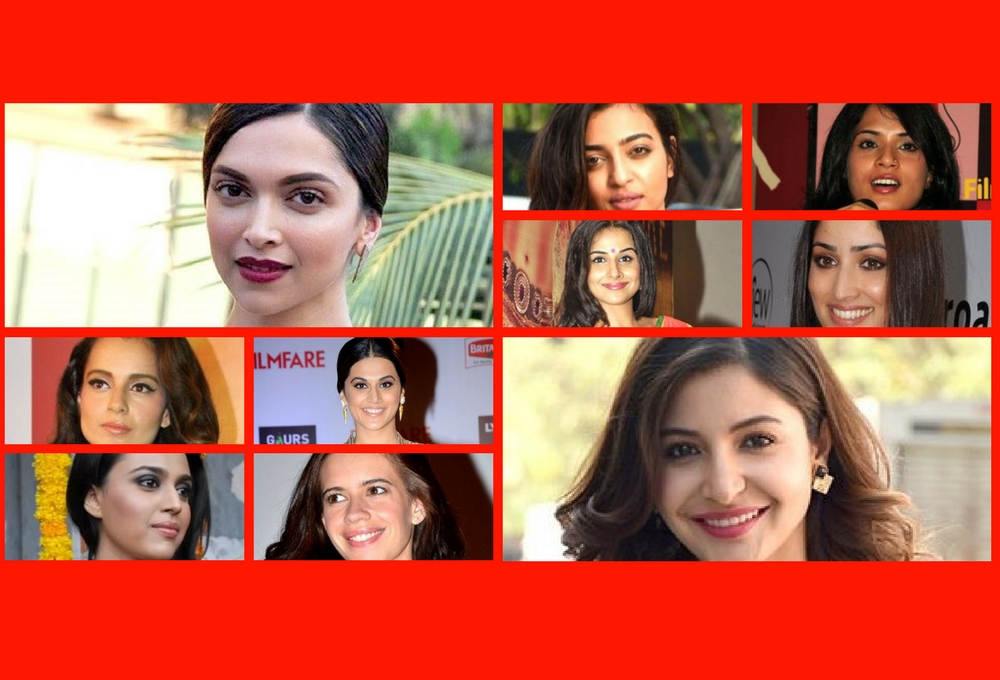 Despite No Filmy Family Connections Or Godfathers, These Ladies Have Made Their Mark In The Movie Industry!

Posted: May 26, 2017
Tags:#GirlsROCKsexismwomen at work

These Indian women actors have no ‘filmy’ background, and have made it to where they are on their own steam, in an industry famous for its nepotism.

Actors who get a break nowadays are usually ‘well connected’ children of established film industry people. Despite this, there are actors, especially a handful of Indian women actors, who have come in without any family background in the movies, or a godfather, and have made a place for themselves through sheer grit and hard work.

Let’s have a look at ten such amazing ladies.

The daughter of the famous badminton player, Prakash Padukone, Deepika Padukone switched careers from sports to modeling. She received laurels as a model and drew attention to herself as a potential actress.

Known for her bold statements, Kangana Ranaut has managed to carve a considerable place for herself in the industry. Hailing from a small town in Himachal Pradesh, she started off with a brief modelling experience and then became involved in theatre training.

Ranaut made her film debut in Gangster (2006) for which she received multiple awards. The stepping stone to her success was Queen (2014) which made it clear to the audience that she had what it took to keep a film running on box office, all alone. She has bagged numerous awards, which include three National Film Awards and four Filmfare awards.

She is one of the few most refined Bollywood actors of today’s time and has the ability to carry a whole film on her shoulders.

Vidya Balan always wanted to have a career on the big screen since a young age, but her attempts towards a Bollywood career were all in vain until she was featured in commercials and music videos. Finally, in 2003 she made a debut in a Bengali drama.

In 2005 she was praised for her role in Parineeta, which was her Bollywood debut. Since then she has worked in a number of excellent movies and played challenging roles like The Dirty Picture (2011), Kahaani (2012) and most recently Begum Jaan (2017). She has been awarded with a Padma Shri in 2014 and five Filmfare awards, along with a National Award.

A software professional turned south Indian and Bollywood actress, Taapsee Pannu pursued a brief modeling career and made her acting debut with a Telugu movie and has appeared in a number of successful films. She has worked in a variety of movies in Tamil, Malayalam, Telugu and Hindi which have won critical acclaims. Her work in Bollywood is numbered but critically and commercially successful, namely Baby (2016), Pink (2016) and Naam Shabana (2017).

An actor, model and a producer, Anushka Sharma is now one the most popular Bollywood personas.

She came to Mumbai to purse a full time modeling career and it was followed by her successful debut in the blockbuster Rab Ne Bana Di Jodi (2008) which earned her a Filmfare award for best female actor. She had her biggest success in PK (2014) and then in Sultan (2016). She was applauded for her production debut NH10 (2015) and also earned critical praise for her performance in the movie. Her production company Clean Slate Film also produced her latest movie Phillauri (2017) and was highly appreciated.

An extremely talented actor, Swara Bhaskar hails from Delhi and even though she has not done many mainstream roles, she has managed to attract attention to herself on the screen.

Making her debut with an offbeat movie, she grabbed the audience’s eye in her supporting roles in Tanu Weds Manu (2011) and Ranjhanna (2013) for which she bagged two Filmfare awards. Her first major role came with Nil Battey Sannata (2016) in which she played the role of a young widow and her performance was critically appreciated.

With a brief modelling career, Richa Chadda also has a history of theatre before she started off in Bollywood with a supporting role in Oye Lucky! Lucky Oye! (2008) and did a Kannada film before her breakthrough in Gangs of Wasseypur – Part 1 (2012) for which she earned a Filmfare critics award for best female actor. Her major work, undoubtedly, has been Masaan in which she played the lead role, and won critical acclaim in international film festivals. She has won three awards and has received a number of nominations.

Hailing from a theatre background, Radhika Apte had her first major role in Bengali Drama series and has also worked in Marathi and Tamil blockbusters. She had a Bollywood breakthrough in Badlapur (2015) followed by Manjhi-The Mountain Man (2016). She was widely applauded by critics for the psychological thriller Phobia (2016). She also worked in the Tamil drama Kabali which proved to be a blockbuster.

A drama student from the University of London, Kalki Koechlin has been interested in drama since a young age. She first worked in a theatre troupe and then started working along with theatre directors in Mumbai.

She made her debut with Dev D (2009) which bagged her a Filmfare award. She drew nominations for her work in the movies Zindagi Na Milegi Dobara (2011) and Yeh Jawaani Hai Deewani (2013).

Apart from acting she has also been involved as a writer and has won awards for the same. She is still associated with theatre and does regular performances. Her independent film Margarita with a Straw (2014) won her a National Award. She has also worked in a few commercials, YouTube videos and as a travel show host.

Beginning as a twenty year old who came to Mumbai to fulfill her dreams, Yami Gautam’s career as an actor shot off from the small screen. She did three television series and participated in a reality show before her Bollywood debut in Vicky Donor (2012) along with Ayushmann Khurana. The movie was a major success and her role was very well received. Apart from Hindi films, she has worked in Tamil, Telugu, Kannada, Malayalam and Punjabi films. She gained recognition in her commercial successes, namely Action Jackson (2014), Badlapur (2015), Sanam Re (2016) and Kaabil (2017).

Why The #NotMyDeepika Tweets Are A Good Thing; Fans Of Others Celebrities, Please Take Notes!