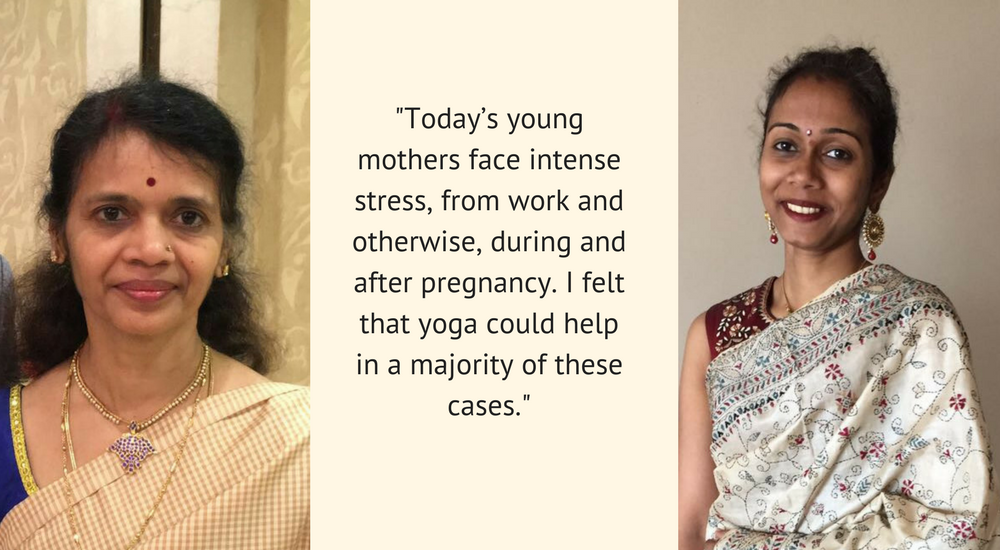 In an apartment in a quiet street in Chembur, Mumbai, the mother and daughter duo of Saraswathy Hariharan and Dr. Shalini Ananth are helping scores of women navigate the emotional and physical challenges of pregnancy and impending motherhood.

It all started in 1993, when a middle-aged homemaker, Saraswathy, attended yoga classes. “I got hooked to yoga. I felt this was a path I wanted to initiate other people in,” she says. She started training as a yoga instructor and worked in the same institute she learnt in. “I would lead a few group classes and we had students who were pregnant in them. I naturally gravitated towards them and took an interest in guiding them with their postures and in alleviating their aches and discomforts and preparing them for labour,” she says. This led to Saraswathy deeply researching and studying prenatal yoga.

She remembers long hours in the Somaiya College Library, where she enrolled for a Bachelor’s degree in Yoga. “I felt that pregnancies of this day and age were very different from the pregnancies of my time. We had the luxury of falling back on a joint family system and had no pressures to resume professional work just a few months after delivery. Today’s young mothers face intense stress, from work and otherwise, during and after pregnancy. I felt that yoga could help in a majority of these cases,” Saraswathy muses.

Being a medical doctor, Saraswathy’s husband would help her with theoretical knowledge of human physiology, muscle and bone systems, as she explored deeper into how yoga could help women’s bodies to keep up with the rigours of pregnancy.

In 2004, a student, named Reena, came to her. Reena* had undergone a third trimester miscarriage recently. She was physically and emotionally broken and was looking to yoga to give her mental peace. She was also looking for answers: could yoga practice heal her? Could she hope to nurture life inside her again and deliver a healthy baby? “It was a special case and I was able to apply my years of research and study. Alongside medication, dedicated yoga and pranayama practice, Reena recovered emotionally. The icing on the cake for me and her was that she conceived in a year and delivered a healthy baby,” says Saraswathy.

When mother-daughter teamed up

Saraswathy was conducting prenatal yoga classes for a handful of students at her home, when Shalini, her daughter, was studying to become a physiotherapist. ‘It might be because I hail from a family of doctors, but through my course, I became very interested in gynaecology. While it is considered an allied subject in physiotherapy, I pursued my internships at maternity homes with enthusiasm. While I did do a stint in geriatric physiotherapy, somehow I felt like gynaecology and helping pregnant women prepare for labour, one of life’s most intense experiences, was my calling,” Shalini says. One thing led to another as Shalini trained as a yoga instructor (from Yoga Institute in Santa Cruz, Mumbai) and as a Child Birth Educator based on the Lamaze principles of Natural Birth (from Hyderabad).

The two ladies decide to merge their knowledge and founded Aaroghya Pregnancy in 2006. “I would say that we combine the ancient sciences of yoga and pranayama with contemporary birthing and pregnancy wisdom to deliver a highly-customisable 26 session module for pregnant women,” says Shalini. Aaroghya also offers a postnatal module for women to regain their core strength, muscle tonality and lose pregnancy weight. It has also served a bunch of women with infertility, thyroid and polycystic ovarian disease (PCOD) issues.

No two pregnancies are the same

Saraswathy and Shalini recount how they have journeyed with some students, over several failed IVF-cycles, pregnancies and miscarriages to successful natural conception. The highlight of Aaroghya is the highly individualized mode of instruction it offers; each class is an independent class, taken for only one student at a time.

“This is largely because no two pregnancies are the same. We prefer dealing with one student at a time, so that we can customize asanas and poses based on their need – whether it is gestational diabetes, high B.P or a breech position. Moreover, every stage of pregnancy needs specific poses and you can’t teach a woman who is four months pregnant the same poses you would, to a woman who is seven months pregnant,” explains Saraswathy.

More than a decade and many happy students later, what keeps the duo going is the feedback and testimonials they receive. “What we love about our work is the twin impact that we have on mothers and children. We don’t promise our students that they will have normal deliveries after training with us, as there are many factors that come into play, before and during delivery. However, what we can ensure is that you will have an optimal pregnancy that will leave you with lots of energy to fulfill your professional and personal commitments, quick postpartum recovery and emotional and physical strength to handle early motherhood. Thanks to positive reinforcement and active communication with the womb, mothers come back and tell us how calm and non-aggressive, their children are, from infancy, all the way up to toddlerhood and through school,” Saraswathy adds.

At a micro-level, prenatal practice of yoga and pranayama will go a long way in strengthening core and back muscles and making the body flexible and supple to go through labour and childbirth and help calm the mind and emotionally de-stress the mother.

One of their most memorable students over the years was Varsha*, an amputee who came to the mother-daughter, asking if they could coach her to have a normal delivery as every doctor she had visited thus far had started the conversation, talking about a cesarean section. “The first thing I told her when I met her was, that she isn’t going to birth with her legs, so of course a normal delivery would be possible. I worked alongside her obstetrician-gynaecologist, who also supported her wish to have a normal delivery,” says Shalini.

They coached Varsha through the eight-odd months she came for class, as her prosthetic leg had to support the increasing weight due to pregnancy. “I would say, Varsha was something of a turning point in our own careers as birth educator and prenatal yoga instructor – her spirit was inspiring and rubbed off on us,” says Shalini. Varsha went on to have a drug-free, epidural-free normal labour and delivery. She delivered a healthy baby in just three hours.

In a market saturated with all sorts of pregnancy classes and birthing educators, what sets Saraswathy and Shalini apart? “Well, for one, there might be classes offering just pre-natal yoga or Kegels or labour counseling, however we offer everything under one umbrella. We also have diet counseling, where we tailor special meal plans depending on individual needs and schedules. Couple counseling, wherein the husband is encouraged to take on an active role during pregnancy, childbirth and newborn care, is also something we specialize in,” says Saraswathy.

“Our classes help women make informed choices through pregnancy, labour, childbirth and postpartum phases. We debunk several pregnancy myths and impart contemporary, scientifically grounded advice. More than anything else, we are mothers ourselves and have been through the rigmarole of pregnancy, childhood and early parenting and we bring to the table that special insight and instinct,” adds Shalini.

Aaroghya Pregnancy classes at Chembur and Bhandup, Mumbai can be reached at 022 25256357.

Top image sourced from the interviewees