A Day In The Life Of An Entrepreneur: Swaathi K, Skcript

Swaathi Kakarla is Co-Founder at Skscript, a start-up technology firm. But here's what's interesting - while a tech entrepreneur, she is still at college. 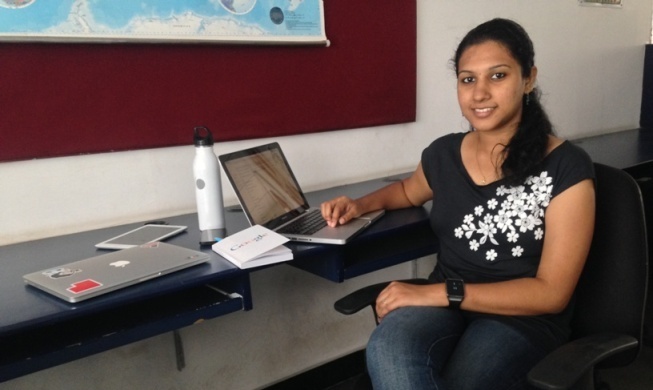 Swaathi K is Co-Founder at Skcript, a start-up technology firm. But here’s what’s interesting – while a tech entrepreneur, she is still at college. Here’s her story.

I was asked a really interesting question in my first year of college, “What’s your dream company?”

It didn’t seem so odd at that time and I had my fair share of companies too – Google, Facebook, Apple. But over time I didn’t feel good answering that question. Because when I thought about it, should your life’s dream be working for someone else? That didn’t feel right to me! I knew I couldn’t do that, at least not for the rest of my life. A year passed by and a friend and I went to an event organized by the Google Developers Group (GDG) in Chennai for women in the technology field. There was a really cool session that happened there. An interviewer was on stage interviewing two women on stage. Interestingly, both of them were entrepreneurs – Sarada Ramani of CI LLC and Jayashree Shankar of NextWave Labs.

They both had very different stories, Sarada started on her business venture much after she had many personal achievements; she was a start up founder at 40! And Jayashree took the more common route. But that event proved a lot to me – especially that your dream does not have to be working for a company.

Another year down the line, a couple of friends and I, along with the help of GDG Chennai, hosted the first Facebook event in the city. This would mark my first tech event as a speaker. Oh, I loved it! It was an introductory session to the Facebook SDK where we had a demo of our tiny code pulling large amounts of user data from Facebook.

Fast forward many events but few months later, Karthik.K, (the lead organizer at GDG Chennai) and I started out on our first ever business venture, Skcript.

Life as a student entrepreneur

Now for me, this was a whole new gameplay. How in the world would I ever manage college, a start up, and my community events? The good thing about being young is that you don’t really think out things a lot, in fact ever! So I decided to just wing it. I mean I don’t really go to college anyways, it’s about time to put that time to use!

The next month was the craziest time of my life. I would get up at 6 to catch the  6.30 college bus (I’m young and carefree. And I have a really awesome mom), waste some time at college while I reply to any light loaded emails, and then when college is over, I head directly to office ( we rented out a small apartment).

There’s so much to do and there just isn’t enough time to have two lives in one day – a student and an entrepreneur. So as you can imagine, my nights run late and weekends don’t exist anymore.

From 4.30 in the evening, our team is busy at work. Skcript works on making B2B applications for our clients and a few interesting projects of our own that we hope some investors might land their hands on soon! But obviously spending 3 or 4 hours for a start up is ridiculous. There’s so much to do and there just isn’t enough time to have two lives in one day – a student and an entrepreneur. So as you can imagine, my nights run late and weekends don’t exist anymore. I owe a lot to Karthik who heavy lifts around here for the most part. You can always find him frustratedly advising me to drop out – and it is so tempting! A few weeks ago, GDG organizers from all over the world were invited to Google I/O. It’s a tech conference that happens annually at San Francisco. I was super excited to return to a country I was once a part of, having spent my childhood there! And this time, I would be heading right into Silicon Valley, the heart of technology. It was such an inspirational experience.

Meeting and talking to Megan Smith, VP of Google[x], Hugo Barra of Xiomi, and Boris Sofman of Anki was such a source of energy and inspiration. These people either made a name for themselves that was completely independent of the company they were working for or merged their name and their company into one living, breathing unit. That’s when I thought to myself there’s no stopping until Skcript inspires someone like this!

But one thing that really disappointed me was that there was no support from my college. If it meant a conference for me, it meant low attendance for them. If it meant my company for me, it meant placements for them. Throughout my small stint as a student entrepreneur, my biggest obstacle has been college. I really think it’s time that colleges in India change and give importance to things outside a set syllabus. But never the less, it’s been a super fun journey juggling my college life and my work life. It’s been hard, but comforting at the same time. Because it means that my struggle is making a difference in the world, no matter how small.

Well I’ve finally tumbled into my senior year now. And I have under a year to take Skcript to new heights. The pressure is really starting to build up now, from my parents gently pushing the idea of working for a company to the steady constant voice in my head saying, “What’s going to happen?”, and of course my co-founders’ familiar persuasive voice telling me to be that difference.

I can’t wait to find out what happens at the end of this year! But one thing’s for sure, I don’t have an answer to “What’s your dream company?” anymore.