Savita Halappanavar: The Math Is Ugly 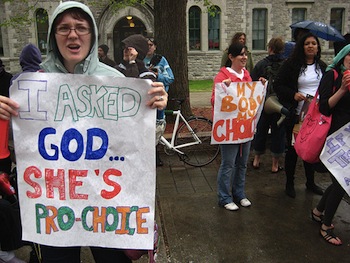 Blogger Meera is a freelance writer and columnist, dabbling in movies and immigrant challenges. She blogs at  http://dreamzwild.wordpress.com

A woman’s life is hard as it is. Why would we want to inflict more pain with politicians and laws deciding what to do with ourselves when we go through a single life transforming event like pregnancy? Frankly, Mr, No Uterus, No Opinion.

The recent US elections enraged women and made feminists delirious. With Senator Todd Akin’s ill informed remarks about rape and abortion and Mitt Romney’s circus dance around women’s rights, Republicans were doomed to lose. On the other hand, when Michelle Obama took the stage on the Democratic National convention and declared that her husband trusted women to make that crucial choice about their bodies, she not only won the crowd’s applause but their votes as well. A pro-choice poster at Ottawa, Canada

We live in the information age and women are raring to go places. There are very few aspects in life that impedes us. Biologically, pregnancy affects only the mother. Therefore, deciding to go with it or end it should be a personal and private choice taken within closed doors. It is surely not a political point worthy of debate neither should it be a legal binding that encompasses all.

In talking pro life, who’s life are they talking about? When the couple decides that they do not want to bring another life into this world, why does government want to decide otherwise?

The acts of personal pleasures are not an agenda for political reform. And most definitely not a topic worthy of debate just to amass vote banks.

The trauma that Savita Halappanavar underwent in the Irish hospital is a nightmare for women everywhere. This was a joyous phase of her life where she was nurturing another life within herself. But when things went downhill, the medical personnel should have showed better judgement. We trust our lives with doctors and when they hide behind religion and laws, it is a sad day for mankind.

Even when the decision to end a pregnancy is made it is not a happy day but a day filled with tears and heartbreak. Let us not worsen it by muddling it up with politics and religion. To state that this is a Catholic country to a women’s plea for life is not the way God intended mankind to treat fellow humans. Show some respect, some remorse and more compassion. A life could have been saved, instead we lose two. No matter how we look at it, the math is indeed ugly.